This site uses cookies to help us provide quality services. Using our services, you consent to the use of cookies.
More info Agree

1981
Way back in 1981 on their return trip from Nashville, Tennessee, Vernon and Lottie Henty decided to start a Country and Western Music Club.

1982
In March 1982 the Club opened its doors under the name of Sutton Valence CMC and was held monthly at the Sutton Valence Village Hall. On an Easter Saturday, a band named Pinkertons Colours was playing at the Club before performing at the Wembley Festival on Easter Monday, when Vernon happened to mention to them that they were playing in the Best of British Section of the festival. One of the band members said to Vernon "No, the Best of British is where we are playing tonight". This gave Vernon the idea of a name change but he was unable to implement it due to the fact that if Sutton Valence was not mentioned in the Club's title the hall hire charge would be increased by 33%.

As the Club became more popluar and grew in numbers, it was decided to run it on a weekly basis but this was not possible at the present location.

1987
The Club moved to the Mid Kent College, Tonbridge Road, Maidstone, and at that time it was decided to change the name to the Best of British CMC. The Club stayed at this venue for the next 2 years.

1989
The Club relocated to the Maidstone Hospital Social Club.

1992(Approx)
We have recently discovered a video on youtube that shows a 6 piece girl band appearing at the Best of British. This clip can be found here. PS. Some of the flags in the background are still in use today.

Additional information on this band may be found here.

1994
The Club then moved to the Malling School, East Malling, after the Rustlers CMC decided to move on.

1997
In December, Vernon and Lottie felt it was time for them to hand over the reigns to Dave and Sue. Their 15 years at the helm saw many changes with the introduction of line and partner dancing; there was also the decline in the number of members dressing in Western style clothes.

Dave and Sue, our took over from Vernon and Lottie and run the Club until February 2005 when the Club closed through lack of support.

November 2005
John & Mary reopened the Club and will run it on a monthly basis
'We will maintain the Club as a prominent Country Music Club with a balance to suit those who come to listen and those who prefer to dance.'

It is with regret that we had to announce the sad news that Vernon Henty passed away on 28th July 2011 after a long struggle with illness. Vernon founded the Best of British CMC way back in 1982.
He was well known throughout the country scene and well respected by numerous bands and musicians and will be sadly missed. 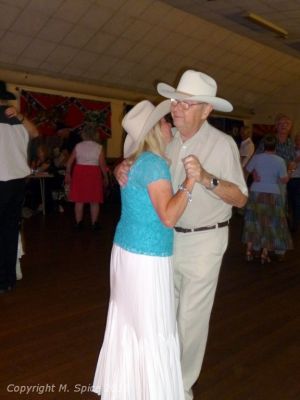 Despite his struggle with cancer John continued to remain involved with the club as long as possible. Ahead of their Golden Wedding in July he was able to dance an anniversary waltz with Mary at the club's June event (see picture). Sadly John passed away in October and in November a special performance of the Trilogy was held in his honour.
Mary vowed to keep the club running together with a team of helpers: Barbara, Danny, Janice, David, Fred, Pam and Mike. At the end of each event many others assist in clearing the hall.

2017
As John wished, and with continued support from regular attenders, the club continues to feature many of the Best of British bands and duos. Resident DJ Dave Goddard provides music from 7.15pm and during the breaks. Mick and Maggie Spice continue to look after our website and populate same with photos of the visiting acts as well as people at the club. 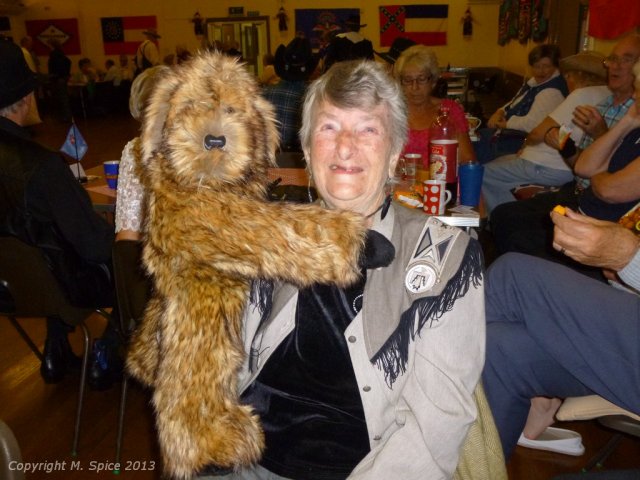 It is with regret that we have to announce the sad news that Lottie Henty passed away on 22nd February 2021, aged 94.
Vernon and Lottie founded the Best of British CMC in 1982.

So all in all this Club is still the very